Mount Lycabettus is a popular viewing point in Athens Greece. But did you know its connection with Goddess Athena, or that there’s a hidden military shelter somewhere up there? Read on to find out more about Lycabettus Hill in Athens.

Mount Lycabettus is the highest point in central Athens, Greece. Known in Greek as Lykavitos Hill, it stands 277 m (909 feet) above sea level, providing spectacular views of the Greek capital and the coastline.

The hill is one of the largest green areas in central Athens, located close to Kolonaki and Exarchia areas. Many Athenians come here for a stroll, take their dogs for a walk, or go to the top to enjoy the city from above.

Lycabettus hill is accessible on foot, by funicular railway and taxi. The closest metro stations are Ampelokipi, Megaro Moussikis and Evangelismos metro station. There is also a spacious parking lot for anyone with their own wheels.

Thousands of tourists visit every year to climb to the top, see the small chapel of Saint George, and enjoy the cityscape from above.

How Lycabettus Hill was created

Mt Lycabettus is known from the times that the 12 Olympian Gods ruled the world.

According to Greek mythology, goddess Athena was the patron goddess of the city of Athens. To honor her, ancient Athenians built the Parthenon, the majestic temple up on the Acropolis complex. 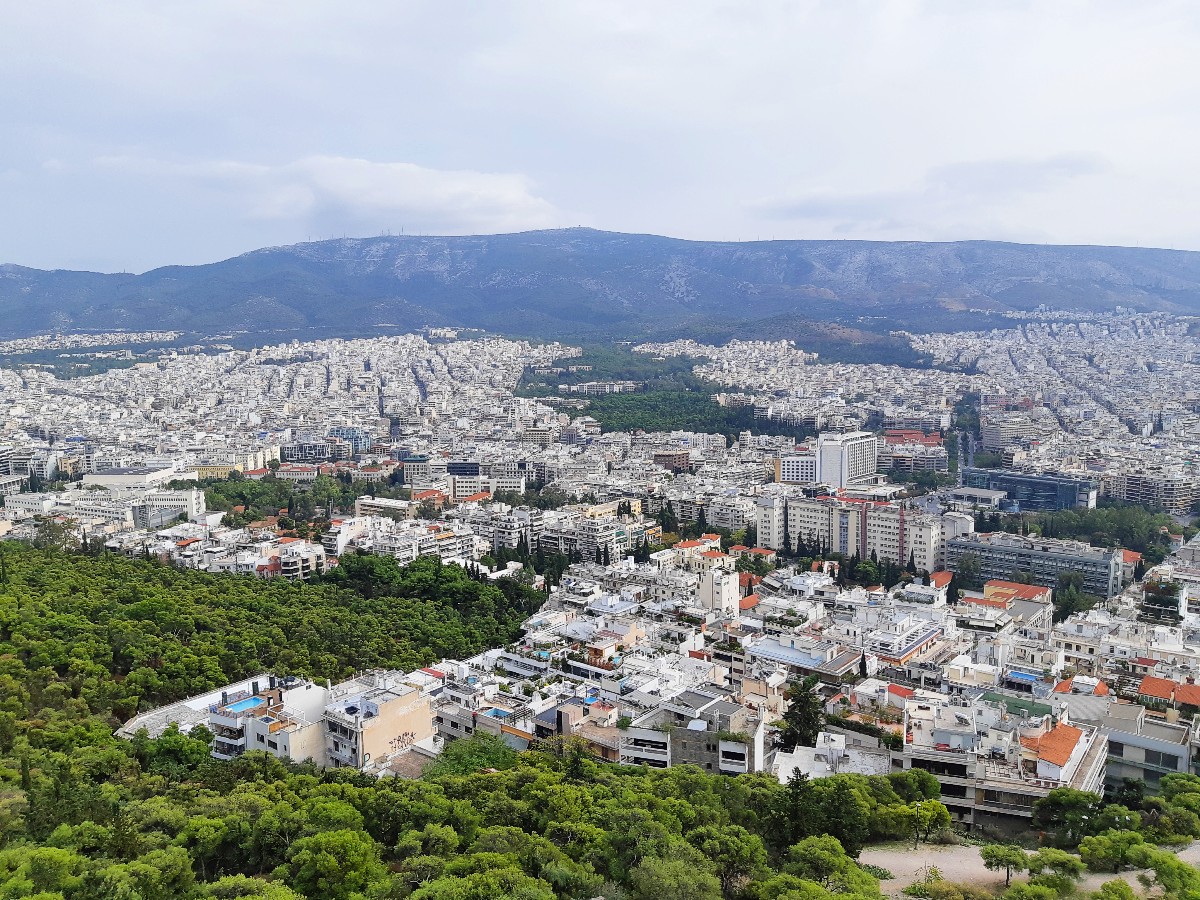 At some point, Athena flew around the city to find a huge rock. Her plan was to place it in front of the Acropolis Hill, to protect the citadel from invaders.

As she was carrying the rock on her way back, a crow approached her, bearing some bad news. Athena was startled, and the big rock fell off her hands and onto the ground. This is how Mt Lycabettus was created.

side note: Since that day, Athena cursed all crows to be black – the symbol of a bad omen.

Short history of Lycabettus in Athens

It appears that Lycabettus was never inhabited over the centuries. A temple of Olympian Zeus may have existed since the ancient years. It was replaced by a Byzantine church, and eventually by the iconic 18th-century chapel of St George, or Agios Georgios, which visitors can still see today. 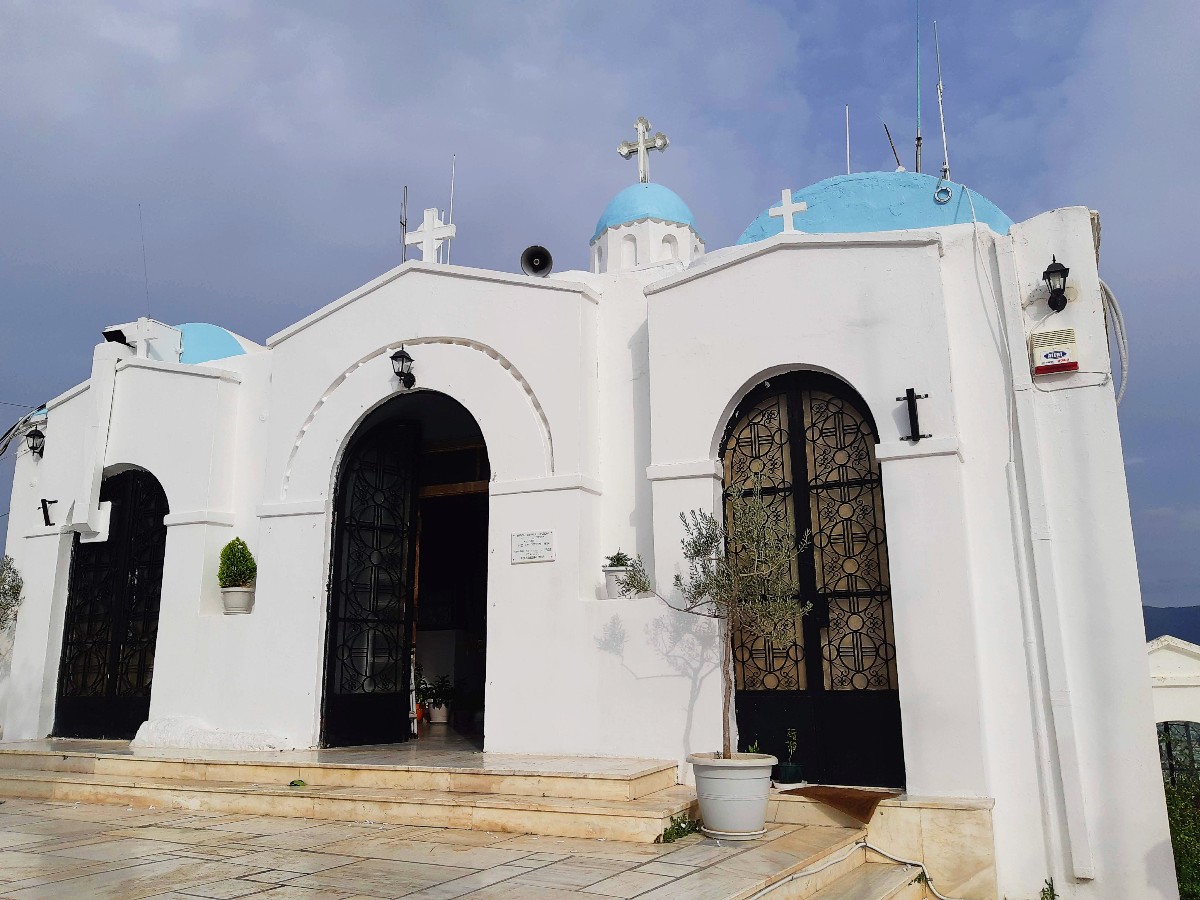 At the time of the Greek Independence War in 1821, Lycabettus was an arid, abandoned part of the city. Yet, the hill was rich in building materials, so quarrying activities began in the 1830s. Many of the houses in Athens have been built with materials from Lycabettus!

The first attempts to plant trees on Lycabettus, in the late 1800s, were unsuccessful, due to the hundreds of goats that lived in the area. It’s hard to imagine the vibrant Kolonaki being a pasture, but Athens has changed over the last 200 years!

A military shelter on Lycabettus

In 1936, general and Prime Minister Ioannis Metaxas ordered the construction of a military shelter on Lycabettus. Anticipating the inevitable involvement of Greece in WWII, he set up a safe space to protect the government officials – and the state records – in a case of air bombing.

If the name Ioannis Metaxas rings a bell, it’s because he was involved in the iconic “OXI” answer, in 1940. Here’s some more information about the Oxi day in Greece. 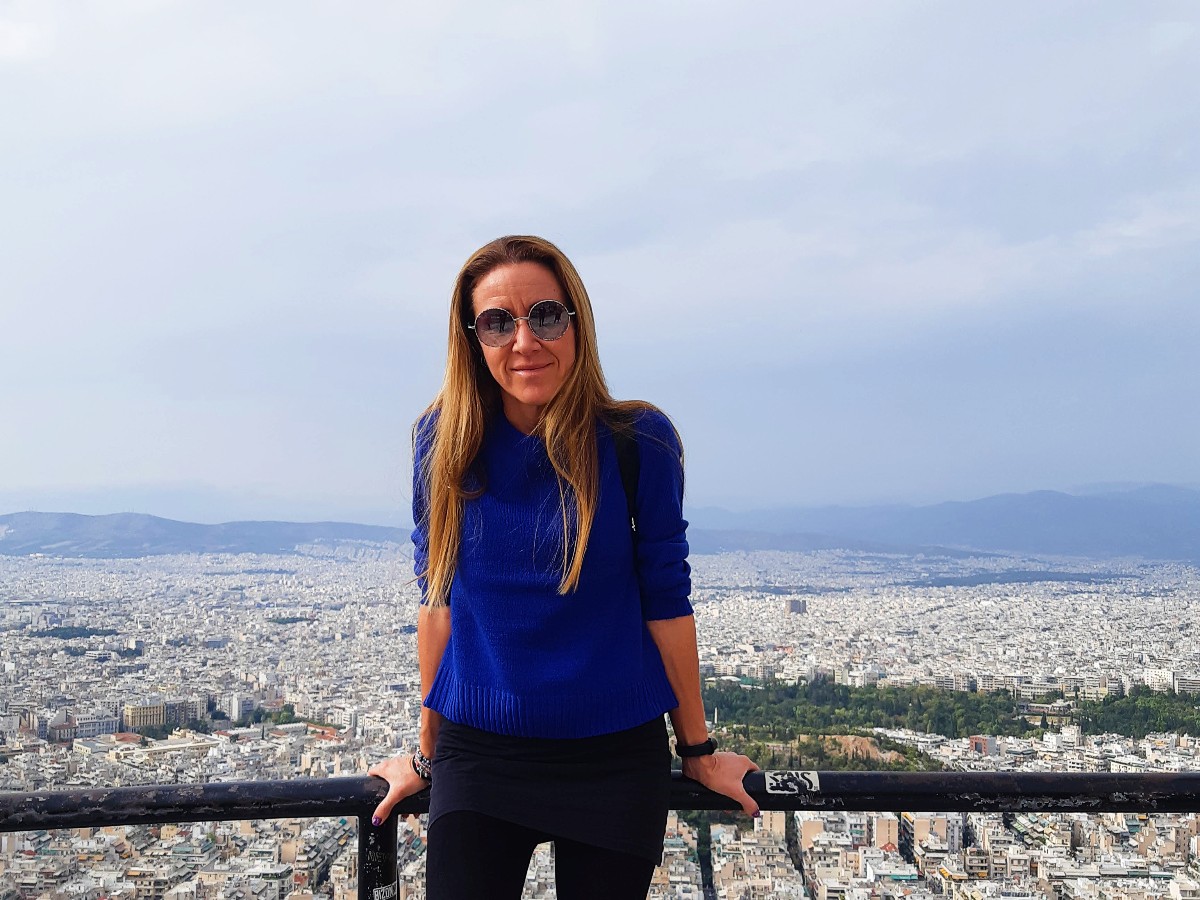 Fun fact: The shelter still exists today, and it belongs to the Ministry of Citizen Protection. You can’t visit the shelter, or find any traces of its existence… or, can you?

During the mid-1930s, a few unofficial performances were held up on the hill. In 1965, a large outdoors theater was constructed. Many generations of Athenians (myself included!) saw various performances and gigs until it was first closed down in 2008. 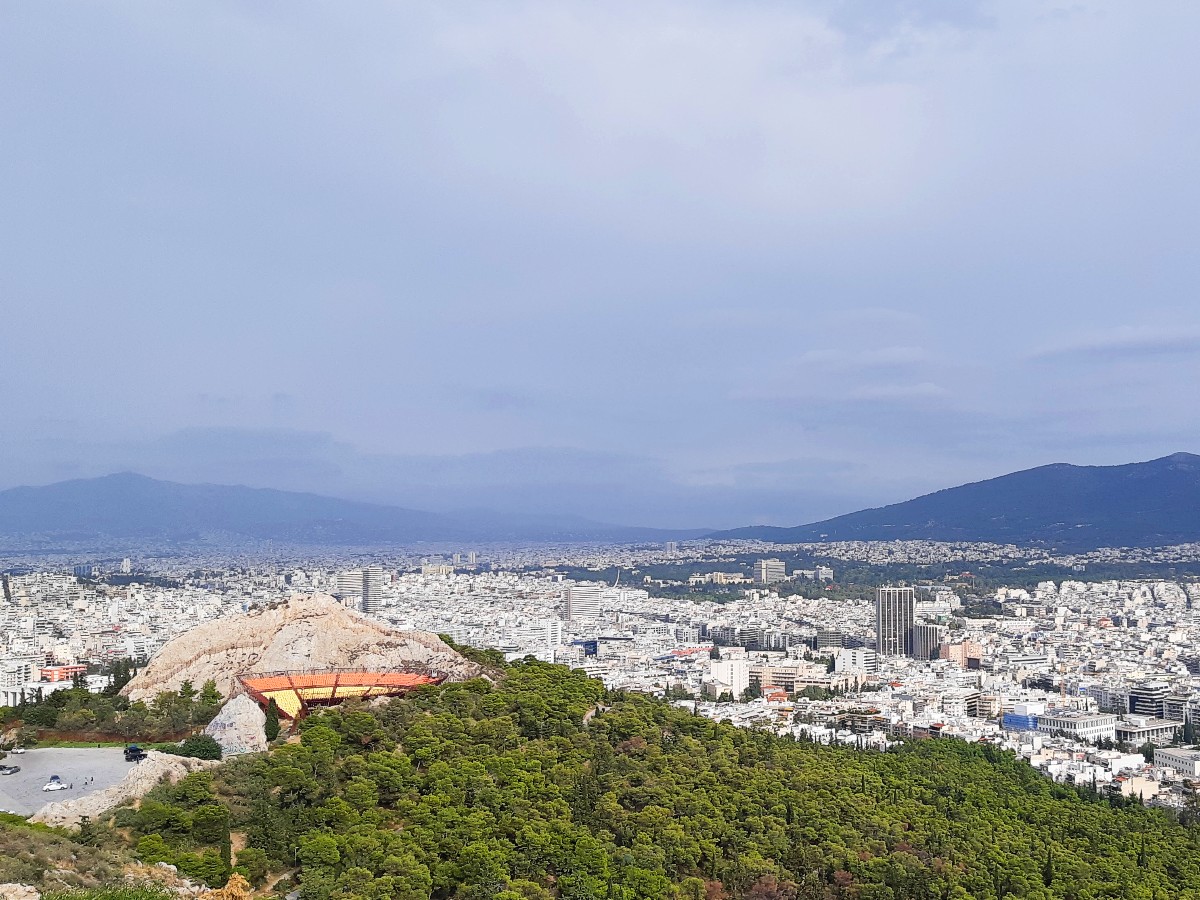 While a few more concerts have happened in the last decade, it is currently uncertain if Lycabettus Theater will function continuously once again. Fingers crossed, as it’s a fantastic place to experience a show.

Lycabettus hill is a fantastic place to go if you want to escape from the hustle and bustle of the city. The peace and quiet is so different from Kolonaki and Exarchia areas right below and the crowded market streets of Monastiraki and Psiri.

Once you reach all the way to the top, you will see the little church of Agios Georgios. Right outside, there is a large viewing platform. You can enjoy amazing views of the hill itself, and the entire city, all the way to the coast. 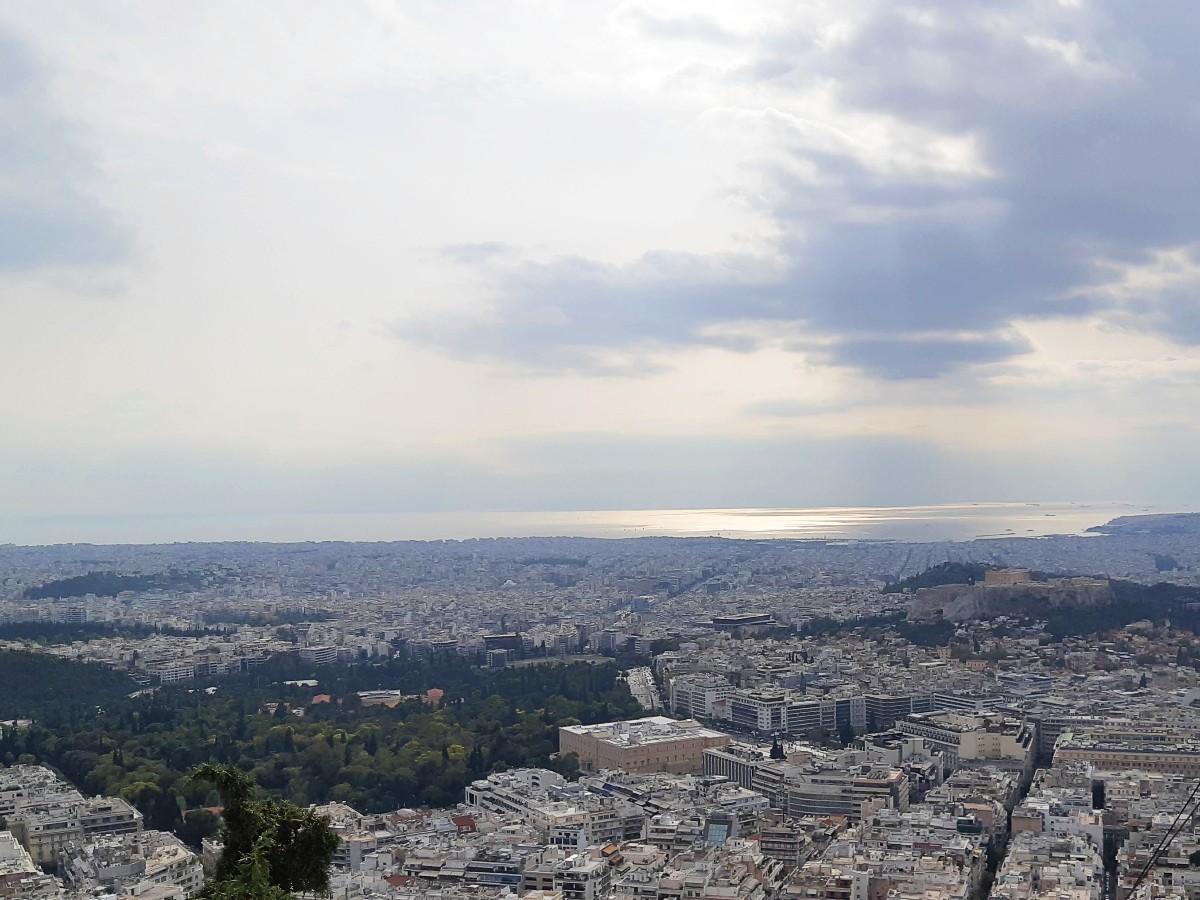 Sunset is a popular time to visit, and you can take some of the best photos of Athens from above. Some landmarks you can spot from above include the Acropolis, the temple of Zeus, the Greek Parliament and the adjacent National Gardens.

On your way down the hill, you can stop at the Prasini Tenta cafe for a break. There’s no denying that it’s overpriced, but it’s a lovely place to sit for an hour and watch the buzzing city from above. For that special occasion, you can also make a reservation at the upscale Orizontes restaurant.

How to visit Mount Lycabettus

If you don’t mind a relatively steep walk, you can hike up Mount Lycabettus entirely on foot. This is the best way to visit if you like nature.

Mt Lycabettus is verdant and lovely to walk around. Visitors can enjoy the clean air and easy hiking trails, among the flowers and pine trees. 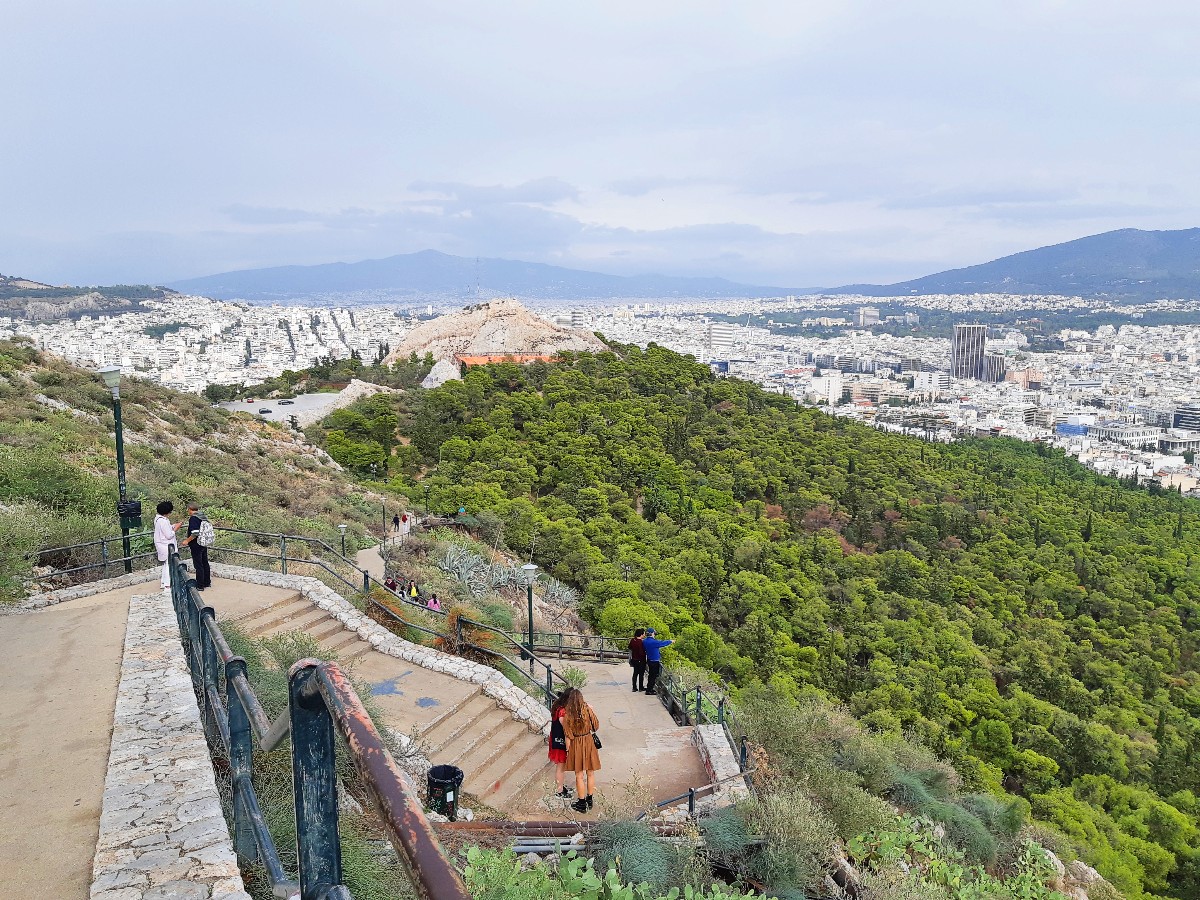 You can climb Mount Lycabettus from various starting points. One of the trails begins on Kleomenous street, in Kolonaki. Or you can take the path which begins on the other side of the hill, marked on Google Maps as Μονοπάτι Λυκαβηττού.

Depending on your pace, it should take you about 30-40 minutes to reach the top. Avoid the hottest part of the day if you are visiting Athens in summer, and don’t forget to bring some water and a hat.

Here are some tips to help you stay cool in the summer in Athens.

An easier – and more fun – way to go up Mt Lycabettus is the cable car. It’s only a short ride, but it will save you the steep climb.

The funicular station, also known as the teleferik station, is on the corner of Aristippou street and Ploutarchou Street. 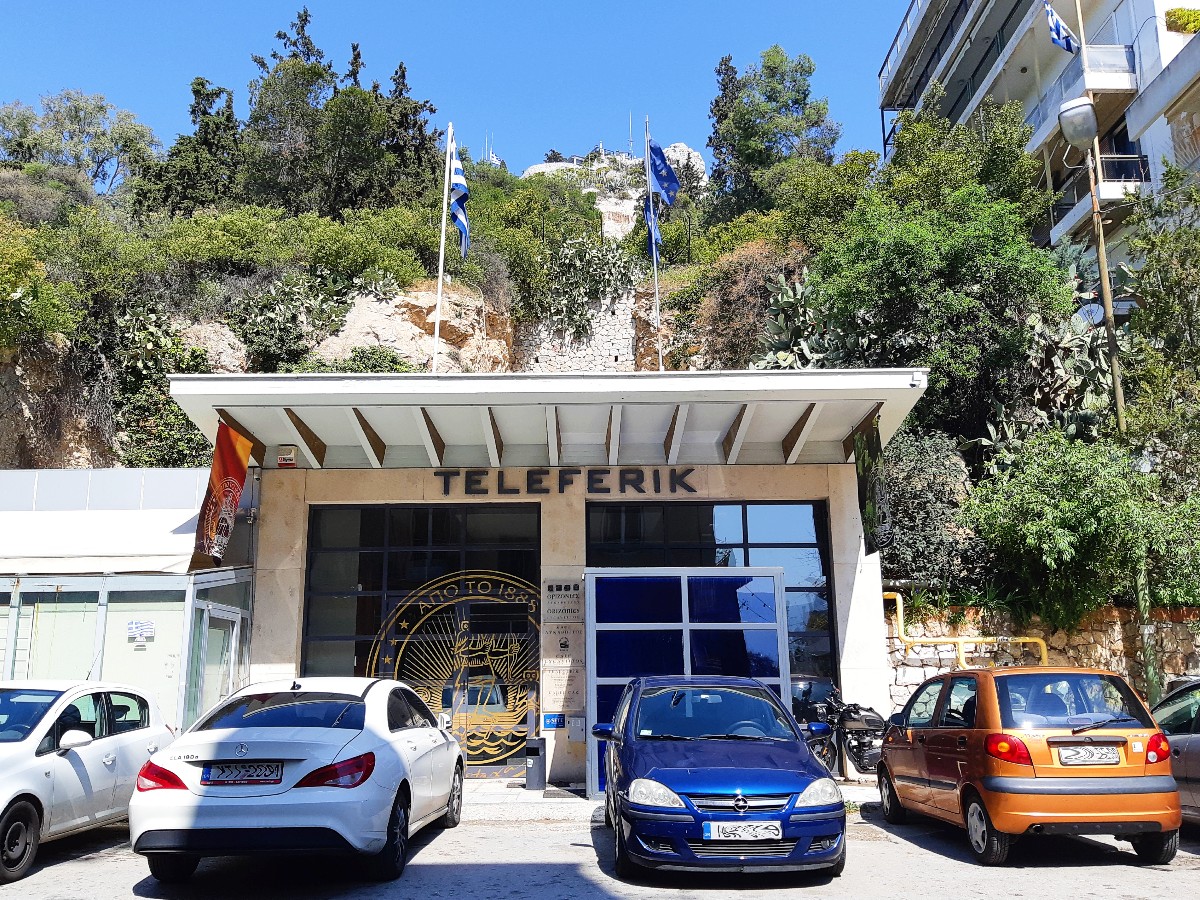 The train runs inside a tunnel, so you won’t have any views as you are going up, but the trip only lasts a couple of minutes. Once you have arrived, you will still need to walk up a few stairs to reach the top.

The train started operating back in 1965! Nowadays it operates every day from 9.30 am – 2.30 am, and the frequency depends on the season. You can get a one way, or return ticket. For more information, check the official Lycabettus funicular website.

Taxis in Athens are plentiful, and you can easily hop on a taxi to take you up the hill. Remember that, however short the distance, the minimum fare for a taxi in Athens is about 3.5 euro.

Note that the taxi will not drop you off right at the very top. You will still need to walk your way up to the church and viewing platform.

If you have your own car or motorbike, you can drive up the paved road, and park at the parking lot. Then, it’s a short walk up to the church. Or you can just enjoy the views of the city at night. 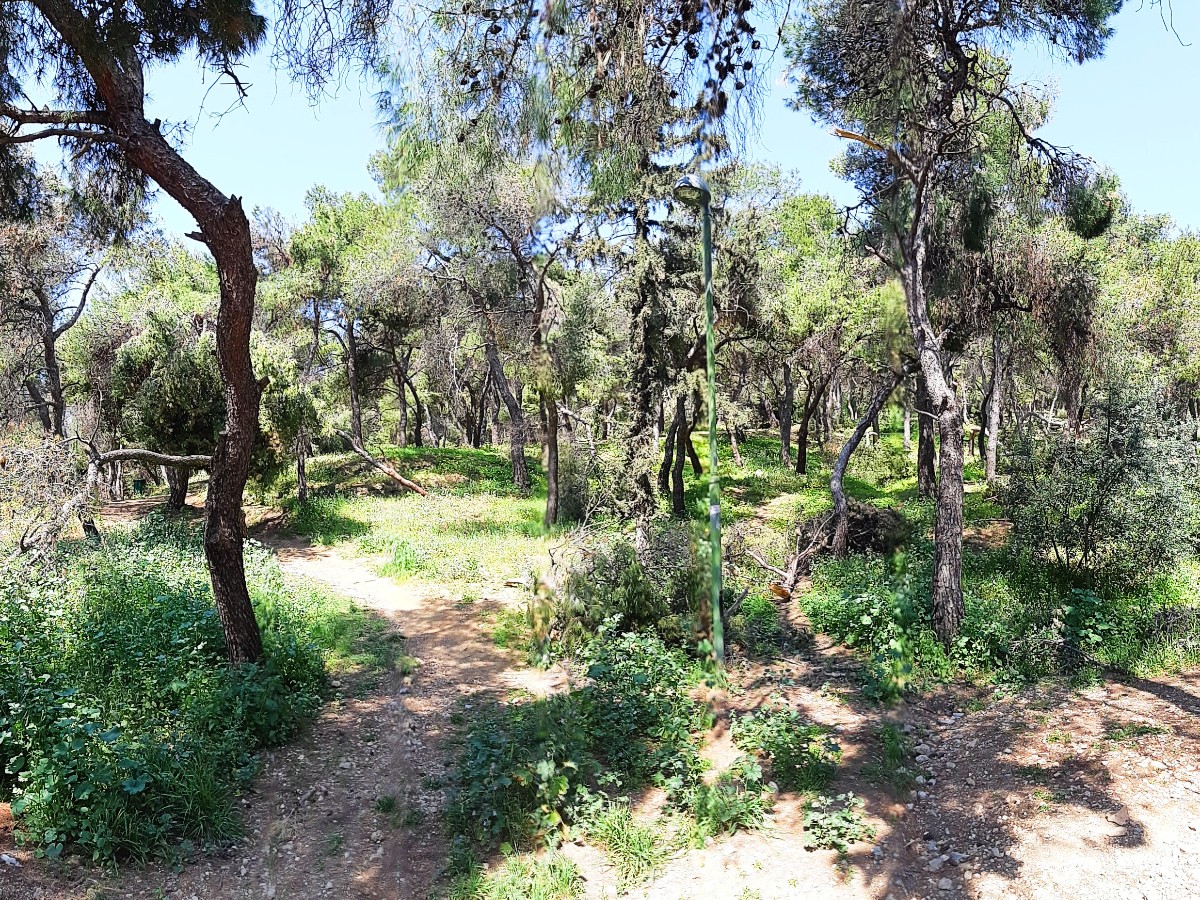 Note: As with any semi-remote area in the city, Lycabettus is often an unofficial lovers’ retreat for people who have just passed their driving test, if you know what I mean. You are also likely to find groups of people smoking and drinking. If you are going after dark, keep that in mind.

Take a private tour of Athens and Lycabettus

If you have limited time and want to see all of the highlights in Athens, including Lycabettus Hill, then why not take a private tour of Athens! You can comfortably visit attractions like the Acropolis, the Acropolis museum and the Panathenaic Stadium, where the first modern Olympic Games were held, without having to worry about transportation in between.

For all of us language geeks out there, there are quite a few theories explaining what the word Lykavitos, or Lycabettus, means.

According to one theory, it comes from the ancient Pelasgian word “Lecabettu”, meaning “a hill in the shape of a breast”. The Pelasgians were, in a nutshell, the ancestors of the Greeks, and you can read more about them here. 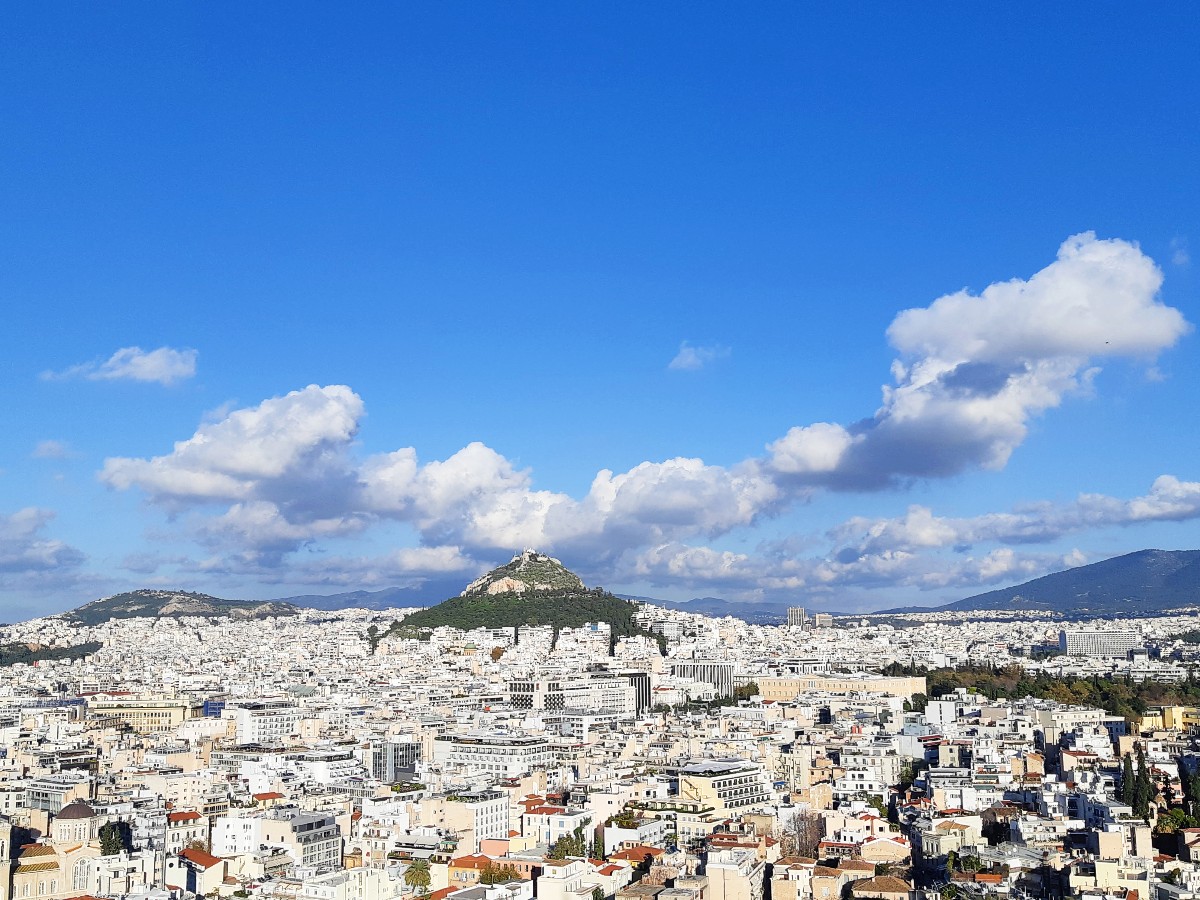 Others believe that “Lycabettus” derives from the ancient Greek word lyx / lyki, similar to the Latin lux, meaning the dawn / light. As Lycabettus is north-east of the Acropolis, ancient Athenians saw the sun rising just behind it.

Or, perhaps the word comes from the Greek words lykosmeaning wolf – allegedly, it once was a den of wolves.

Does it really matter? Maybe not! In any case, this is a cool drone video where you can see Lycabettus from above.

Here are some questions that visitors ask often about Lycabettus:

Hiking up Mt Lycabettus is a wonderful way to experience the highest hill in central Athens. Alternatively, you can take the cable car, or a taxi.

What is the cheapest way to get from Athens to Mount Lycabettus?

The cheapest way to go up Mt Lycabettus is on foot. It should take you around 30-40 minutes to reach the top from the foot of the hill.

How far is Mount Lycabettus from Syntagma Square?

You could walk to the foot of Mount Lycabettus from Syntagma square in 20-30 minutes. If you are taking a taxi, allow about 20 minutes to reach the top.

Is Mount Lycabettus the highest point in Athens?

Do you need to book in advance to visit Mount Lycabettus?

Hi! I’m Vanessa from Athens, and I’ve been up Lycabettus more times than I can remember… the iconic Trypes gig in 1994 was just one of those times! Mount Lycabettus is a beautiful place to see the views from, and appreciate how large the city of Athens is. Follow my FB page for more info about Greece.