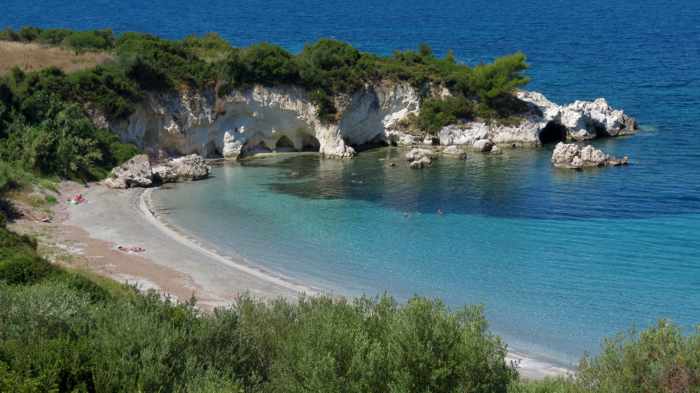 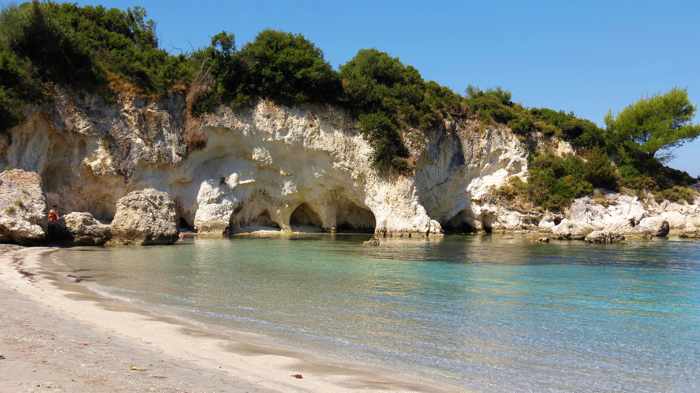 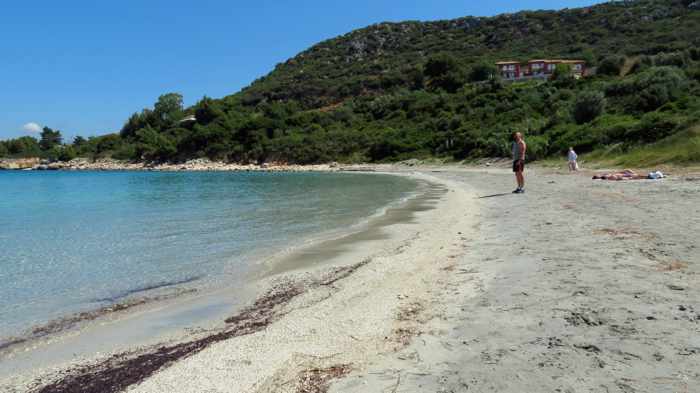 Four different views of Kalamia, a picturesque beach near the Lassi resort area on Kefalonia island

Cliffs, caves & calm: We had a sense of déjà-vu when we were flipping through a recent issue of Travel + Leisure magazine and spotted a picture of a coastal landscape that looked very familiar — a crescent-shaped beach with ivory and pale brown sand tucked between tree-covered hills, white limestone cliffs and clear turquoise seas.

Our initial “Hey, we’ve been there!” reaction quickly gave way to surprise when we discovered we were wrong. The photo caption identified the location as Voutoumi beach on Antipaxos, while the article itself was a report on Paxos island nearby. We haven’t been to either place.

Nonetheless convinced we had photographed a nearly identical scene, we scoured our computer files to find the image that had triggered the flashback. We started with our photo collection for Kefalonia, since that island — which we have been to — is only 120 km southeast of Antipaxos in the Ionian Sea off western Greece. With such a short distance between the two islands, it seemed logical they might possess comparable landscapes and geology.

Sure enough, our search found the “lookalike” — Kalamia beach — on Kefalonia, and our photos confirmed that it does bear a strong resemblance to Voutoumi. One of our Kalamia pictures was even shot from a similar perspective as the Voutoumi beach image in the magazine. 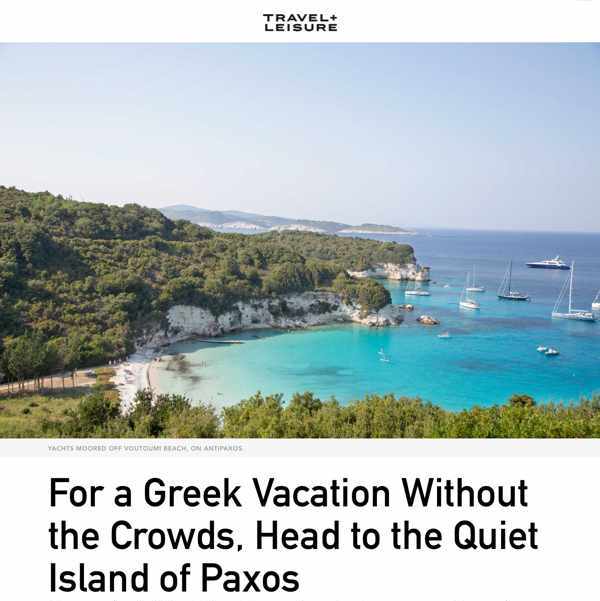 Above is a screenshot of the Travel + Leisure magazine article with the Voutoumi beach photo that triggered memories of our visit to Kalamia beach on Kefalonia, seen below in one of our own images 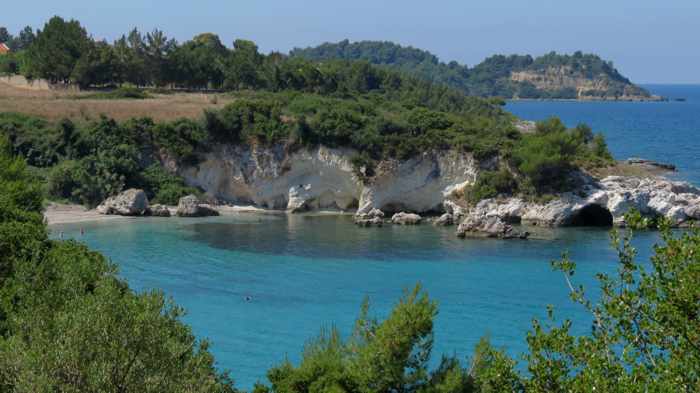 Our next surprise was realizing we never blogged about Kalamia beach after our trip. Since we had our beach photos readily at hand, we have gathered them here, with these notes and observations:

♦ Kalamia is located below the coast road that runs between the Lassi resort area and Argostoli (it’s near Oskars Studios & Apartments). We followed a trail that led from the road to the beach, but apparently didn’t notice a dirt track we could have walked down instead.

♦ We went to the beach on May 31 2017. It was still low season for tourism on Kefalonia, and there were perhaps just a dozen other people there besides us. With so few tourists around, Kalamia was peaceful and calm — perfect for resting and relaxing in the sunshine and light sea breeze.

♦ The sea was cool but the shallow waters were comfortable for wading and swimming.

♦ There were no facilities of any kind at the beach on that beautiful spring day — no lounge chairs or umbrellas to rent, no canteens or beach bars selling snacks or beverages. But travel guides and Lassi hotel websites do describe Kalamia as an organized beach. We later learned that rental sunbeds are installed in time for summer, while at least one beach bar is open during peak season as well. We just happened to be visiting the island too early to see them. (On page 2, we have included some social media photos showing the beach chairs and bar that were available during summer 2021).

♦ We were surprised to see two elderly couples sunbathing and swimming nude. We haven’t seen Kalamia included in Kefalonia listings on naturism websites (we checked), but it’s possible these couples had decided to relax au naturel since the beach wasn’t yet organized, and no young children were present.

Below are several of our photos showing views of Kalamia beach as we approached along the coast road between Lassi and Argostoli. On page 2, you can see ground-level photos of the beach and its vistas, as well as social media pictures showing Kalamia’s summer-season sunbeds and beach bar. 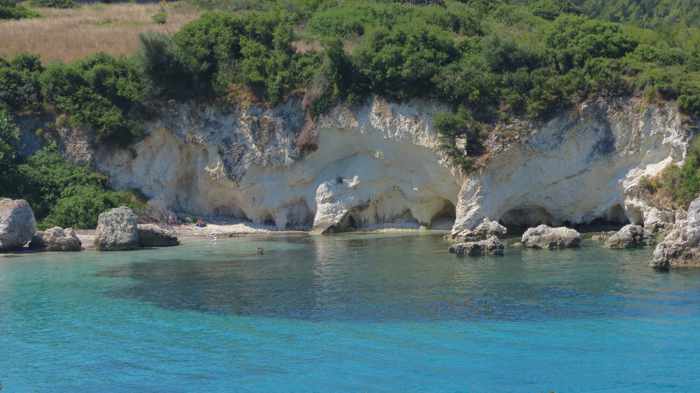 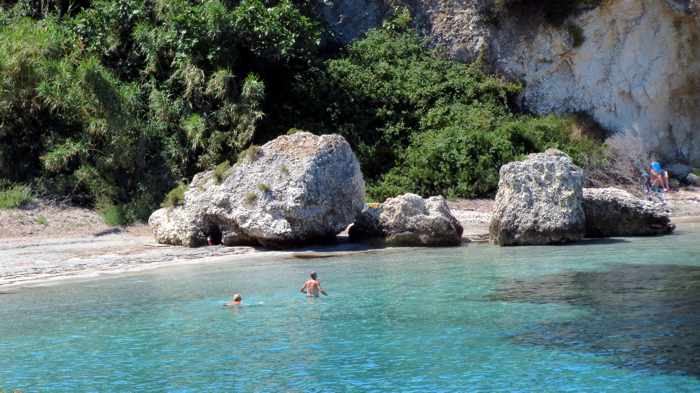 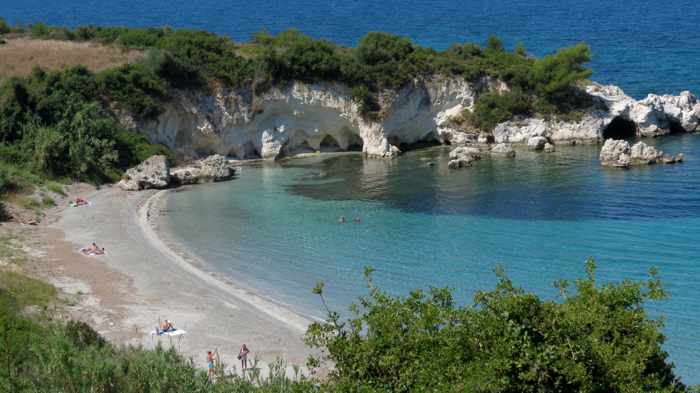 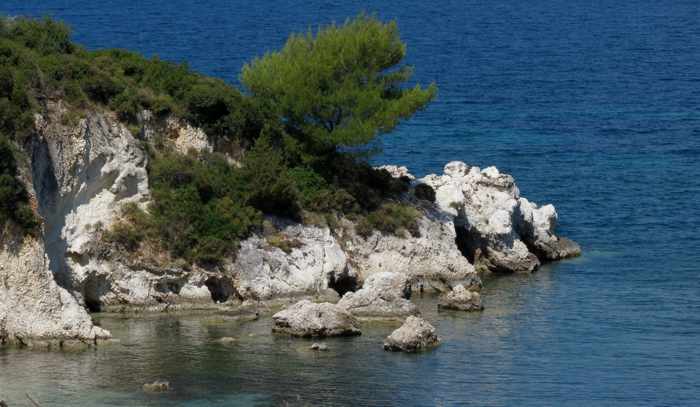 Please turn to page 2 of this post to see our ground-level photos of the beach and its views, as well as several photos shared on social media that show a bar and sunbeds on the beach during the summer 2021 holiday season.