Kaimaki ice cream is one of the most aromatic and uniquely-flavored ice creams. And that’s because it’s flavored with a spice called Salep, Mastiha, as well as Rosewater. So its flavor has a hint of spiciness and its aroma will have you traveling to the middle-East!

So what is Salep?

Salep which comes also under the name of Sahlep, or Sahlab is flour from the tubes of an orchid plant. This spice has been used since ancient times not only because it yields a flavorful warming drink, but also for its medicinal properties.

Turkish people have it as a traditional drink made with milk and served with cinnamon. As you can see here. It is very comforting and good for the digestive system.

That’s because it contains a starchy polysaccharide called glucomannan. When Salep gets mixed with water and boils it thickens a lot. And becomes very gelatinous. This is what gives Kaimaki ice cream a hint of stretchy texture (compared to plain ice cream).

Just make sure you buy the pure Salep powder and not the drink powder.

The Mastiha And Rosewater

These two flavorings are also used a lot in Middle Eastern cuisine. They give a very refreshing and appetizing flavor to sweets. In this recipe, I am using both Mastiha tears as well as Mastiha liqueur. If you cannot find Mastiha liqueur then you can use a white spirit such as rum.

As for the rosewater make sure you buy pure rosewater that is meant for cooking purposes and not just for cosmetics so it’s without any additives.

How To Make Kaimaki Ice Cream

There are two ways in which you can make Kaimaki ice cream. The first one is by using the ice cream machine. And the second is by using an electric hand mixer. In both ways, you need to heat the milk and heavy cream mixture (including sugar and flavorings) first. Until it forms Kaimaki on its surface. Kaimaki refers to the frothy foamy topping that forms on the surface of the milk and cream mixture after it has been heated for a while, over low or medium-low heat (depending on how strong your stove is). If you are using a gas stove it is better to keep the temperature low.

You will then need to let this mixture cool down to room temperature before placing it in the fridge to cool even further. Once cooled you may add the remaining flavorings (rose water and Mastiha liqueur or Rum). And then place the mixture either in the ice cream machine or in a mixing bowl with a lid (preferably a stainless steel one).

The process for making Kaimaki ice cream with an electric hand mixer goes as follows: cover the bowl with the lid and place it in the freezer for one hour. Remove the bowl from the freezer and with whisk attachment on the electric mixer beat for 2 minutes over medium speed. Cover and place the bowl back in the freezer for another hour. Repeat this process of freezing and mixing an overall of 4-5 times until the mixture gets very thick yet still mixable. You can then freeze it for 3-4 hours more until it’s ready to serve!

Traditionally in Greece, Kaimaki is served most of the time topped with sour cherry preserves in syrup. Even though you can serve it on its own or with any other red fruit preserves you prefer. Another great topping for this ice cream is rose preserves that give an even more intense and aromatic flavor. 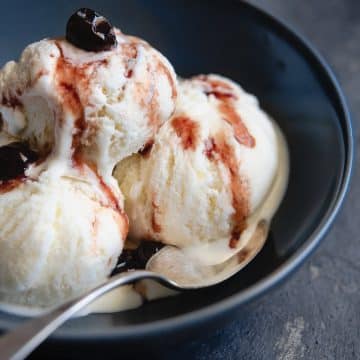 Kaimaki ice cream is very aromatic and uniquely flavored. With a spice made out of an orchid plant as well as Mastiha and rose water.