There are 15 main Dodecanese islands in Greece, with the most popular islands being Rhodes, Kos, and Patmos.

Greece can be a confusing country. Take the Dodecanese for example. The name would indicate there are 12 islands, but in fact there are over 150!

To confuse matters further, 26 of these islands are inhabited (some by just 2 people!). You’re probably starting to see the phrase it’s all Greek to me can easily be applied.

All this aside though, The Dodecanese is the perfect holiday destination for Greek island hopping. There’s plenty of varied islands to choose from, both large and small, and regular ferries.

Which Dodecanese Islands can you travel to?

Generally speaking, when people refer to the Dodecanese, they mean the islands you can actually get to on some form of public transport!

You can fly to eight of the Dodecanese islands as they have airports: Rhodes, Kos, Leros, Kalymnos, Karpathos, Kassos, Kastellorizo ​​and Astypalea. Of these, Rhodes and Kos island have international airports, with direct flights to European cities.

All the airports have connections with Athens (apart from Kastellorizo), and some may connect with Thessaloniki.

The other way to reach the islands in the Dodecanese island group is by ferry. The large islands may have connections with Athens Piraeus Port, while some of the smaller islands may only connect with one another.

The Dodecanese islands closest to Turkey may also have occasional ferry services or day trips to the Turkish coastal port towns!

Look for Greek ferries sailing between the islands at: Ferryscanner

Dodecanese islands with smaller populations don’t necessarily have regular ferry connections. Instead, you may be able to travel on boat day trips from nearby islands, or there might be infrequent ferries that only the locals know about!

As mentioned, there are 15 larger islands that you can travel between easily by ferry. These islands are large enough to have a ferry port, and have tourist infrastructure such as places to stay.

So, for the purposes of this article, these 15 islands in the Dodecanese is what we will stick with!

Below is a list of the major islands in the Dodecanese complex, with a brief description of each one and what to expect when you visit.

Rhodes is the largest and most popular island in the Dodecanese, with a population of over 110,000 people. The island is well known for its stunning beaches, nightlife, and historical landmarks such as the Palace of the Grand Master. 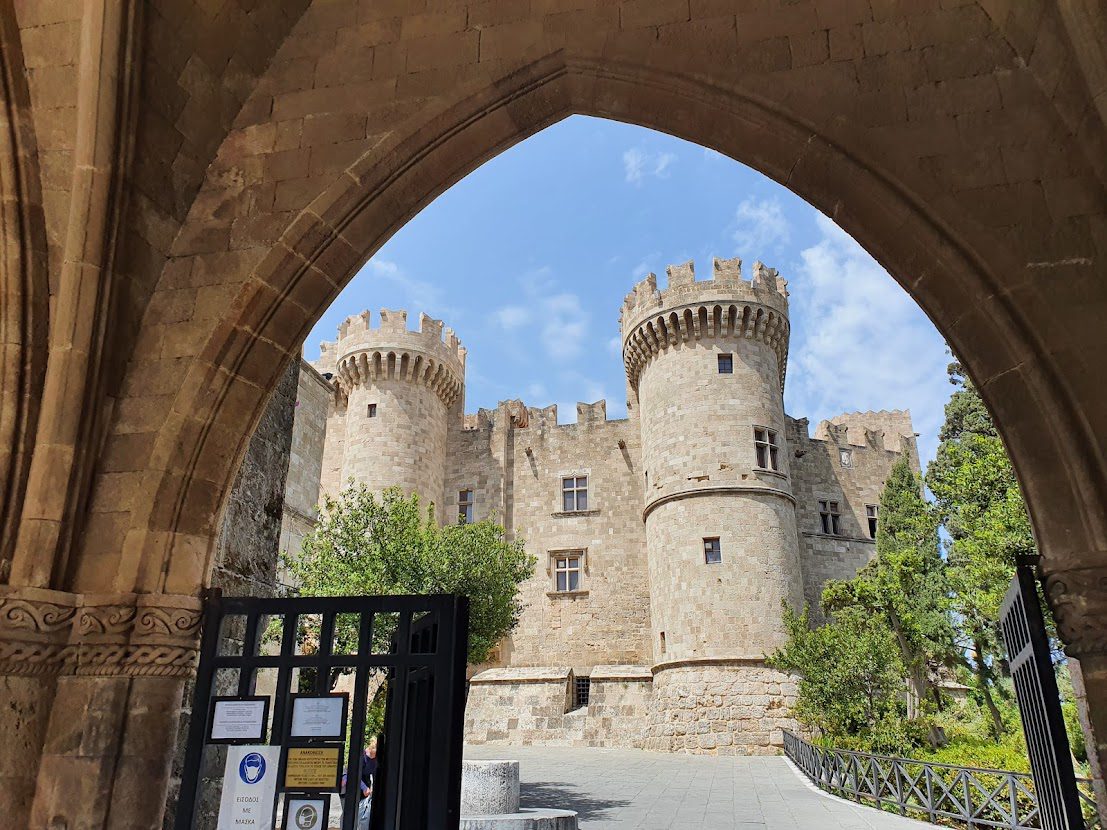 The island’s capital Rhodes Town is perfect for those that want to explore the history and culture of Rhodes. In fact, Rhodes Old Town is a UNESCO World Heritage Site – one of 18 in Greece! The best beaches can be found on the east side of the island, with Afandou, Tsambika Bay, Anthony Quinn Bay, and Lindos Beach all being popular.

Kos is the second largest island in the Dodecanese, and has a population of over 30,000 people. The island is well known for its beaches, nightlife, and historical landmarks such as the Asklepion.

The island’s capital Kos Town is perfect for those that want to explore the history and culture of Kos. In fact, this is the birthplace of Hippocrates – one of the founders of modern medicine! The best beaches are scattered around the coastline, with Kardamena on the south coast and Tingaki on the north coast being particularly popular.

Patmos is a small, quiet island in the Dodecanese that is perfect for those that want to get away from it all. The island has a population of just over 2,000 people, and is well known for its religious history. Cruise ships drop by here, as this is where St John wrote the Book of Revelation.

Patmos is home to the Monastery of Saint John the Theologian, which is a UNESCO World Heritage Site. You can also visit the Cave of the Apocalypse and Grikos Beach, which are both popular attractions.

Agathonisi is a small, quiet island in the Dodecanese that is perfect for those that want to get away from it all. The island has a population of just over 200 people, and is well known for its unspoiled beaches and crystal clear waters.

Life is pretty simple here – there are three tavernas and three bars. You can walk most places, but you might also want to arrange a local to take you by boat to a hidden beach for a day!

Astypalaia is one of the Dodecanese islands that is starting to feature on more people’s radars. With a population of just over 1,300 people, the island is well known for its beaches, crystal clear waters, and Venetian architecture.

Astypalaia is a great place to relax and take in the natural beauty of the Dodecanese islands. The beaches here are some of the most beautiful in the area, and the crystal clear waters make for perfect swimming and snorkeling.

Some people choose to visit Chalki in a day trip from Rhodes, but it is definitely worth spending a few days here. With a population of just over 200 people, the island is well known for its beaches, crystal clear waters, and traditional Greek architecture.

Chalki is a great place to relax and take in the natural beauty of the surroundings.

Kalymnos is a small, rugged island in the Dodecanese that is well known for its sea sponges. The island has a population of just over 13,000 people, and yet you never really hear it talked about.

This is a beautiful and picturesque island – visit the beaches of course, but also check out the archaeological museum and St Savvas Monastery.

Karpathos is a large, mountainous island in the Dodecanese that is well known for its hiking trails. The island has a population of just over 8,000 people, and is perfect for those that love the outdoors.

The island’s capital Pigadia is a great place to start your exploration of Karpathos.

Located towards the south of the Dodecanese islands, Kasos is a small island sheltered from the tourist trail. If you’re looking for an authentic experience, and a taste of what Greece was like perhaps 40 years ago, why not give it a try?

Like many other islands, you might find more than one spelling as you do your Greek island research online! Lipsi is a small island in the Dodecanese that is known for its crystal clear waters, as well as its relaxing atmosphere. The island has a population of just over 700 people, and still retains much of its traditional charm

With a wild landscape, Leros is located between Patmos and Kalymnos. It feels like tourism never really took off here, which makes it an island that travelers after a more genuine experience of Greece might like to consider visiting.

Known for its beautiful beaches, picturesque villages, and pristine scenery, Nisyros is an ideal destination in the Dodecanese for anyone looking to get off the tourist trail. You will feel worlds away from busy Rhodes, and highlights include Mandraki village and an active volcano!

Most commonly visited on a day trip from Rhodes, it’s worth spending a few days on Symi, especially if you want to get away from the crowds! With a population of just over 2,000 people, Symi is also known for its beautiful scenery, architecture, and relaxed atmosphere. 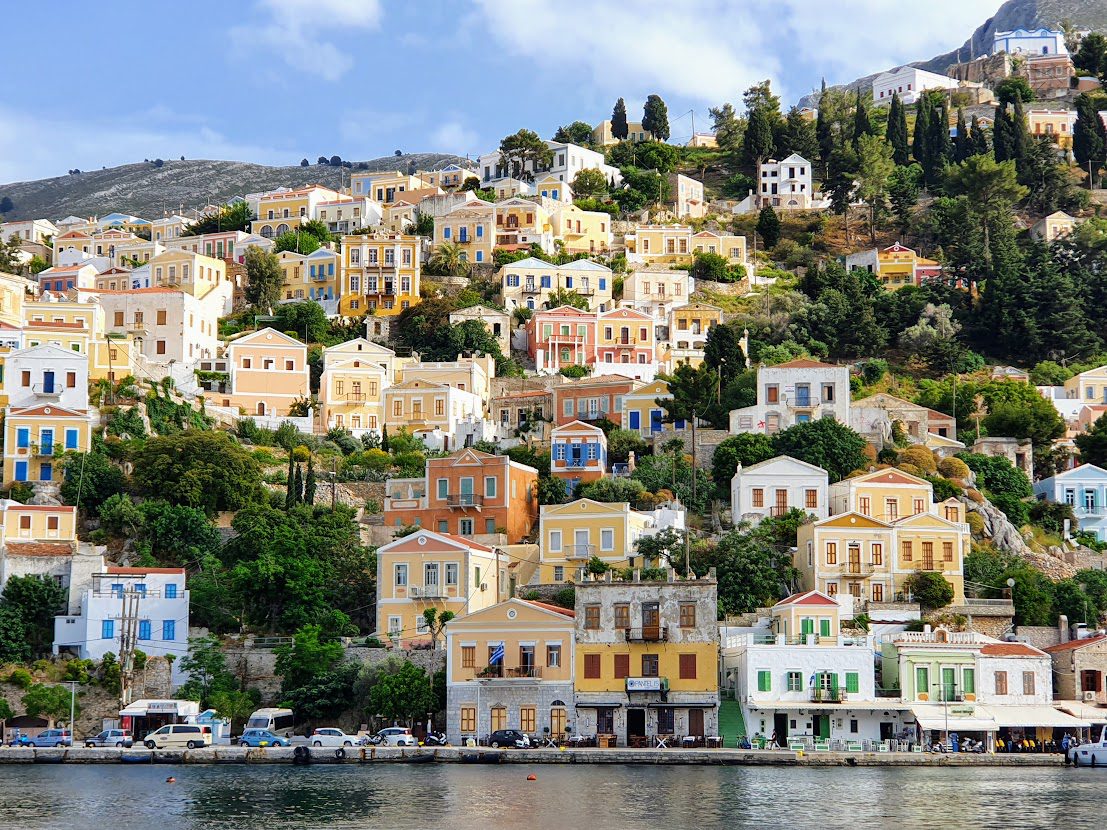 We spent a week in Symi, and instantly fell in love with the island. The colorful houses and port setting are amazing, but it was really the people who made our trip so special. 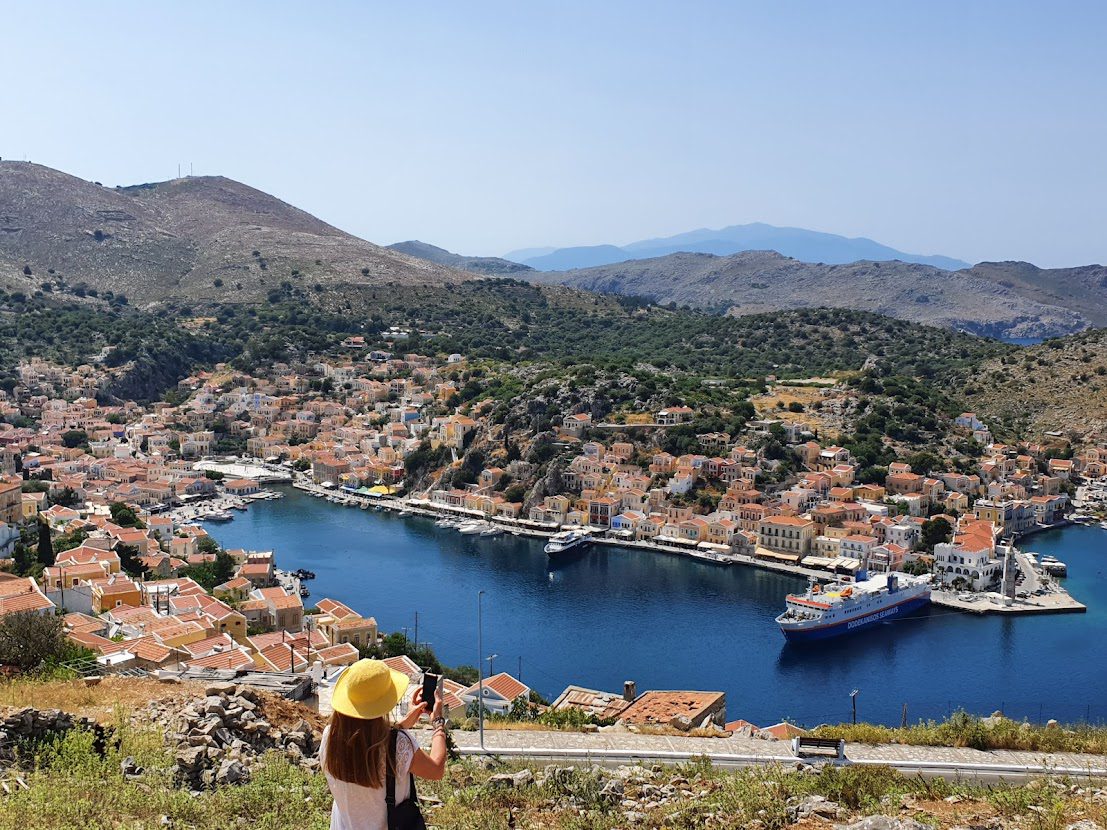 Highlights of our stay on Symi were walking around the town and up and over the hills for various viewpoints of the port town. We also visited the Monastery of the Archangel Michael Panormitis, but if truth be told, we were not all that impressed. It is, however, one of the very few monasteries we’ve seen at sea level and not on top of a mountain!

There’s three standout beaches in Symi. The first, is St Nicholas Beach which is a short but pleasant hike from the village of Pedi. The other two beaches are Agios Georgios Dysalonas and Nanou. These can only be reached on a boat trip.

We did it slightly differently, and managed to take a kayak trip with Trekking Hellas Rhodes. I highly recommend this, so get in touch with them to see if you can do the same! 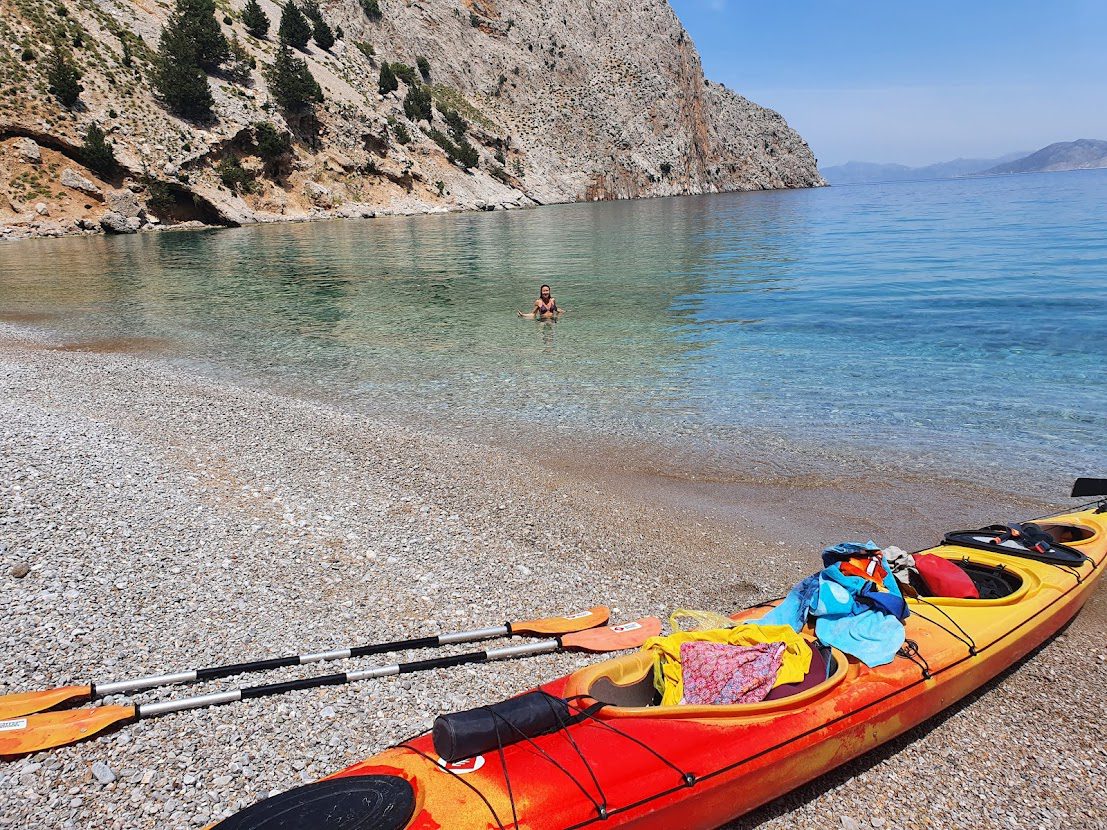 Read: How to get from Rhodes to Symi

The tiny island of Tilos is a peaceful little corner of the Dodecanese. As the first energy self-sufficient island in Greece, it has hopefully started a trend that other islands will follow!

Kastellorizo ​​is a tiny island located in the southeastern Aegean Sea, and is often considered to be the most eastern island in Greece. If you look on the map, you’ll see it is positioned right next to Turkey. 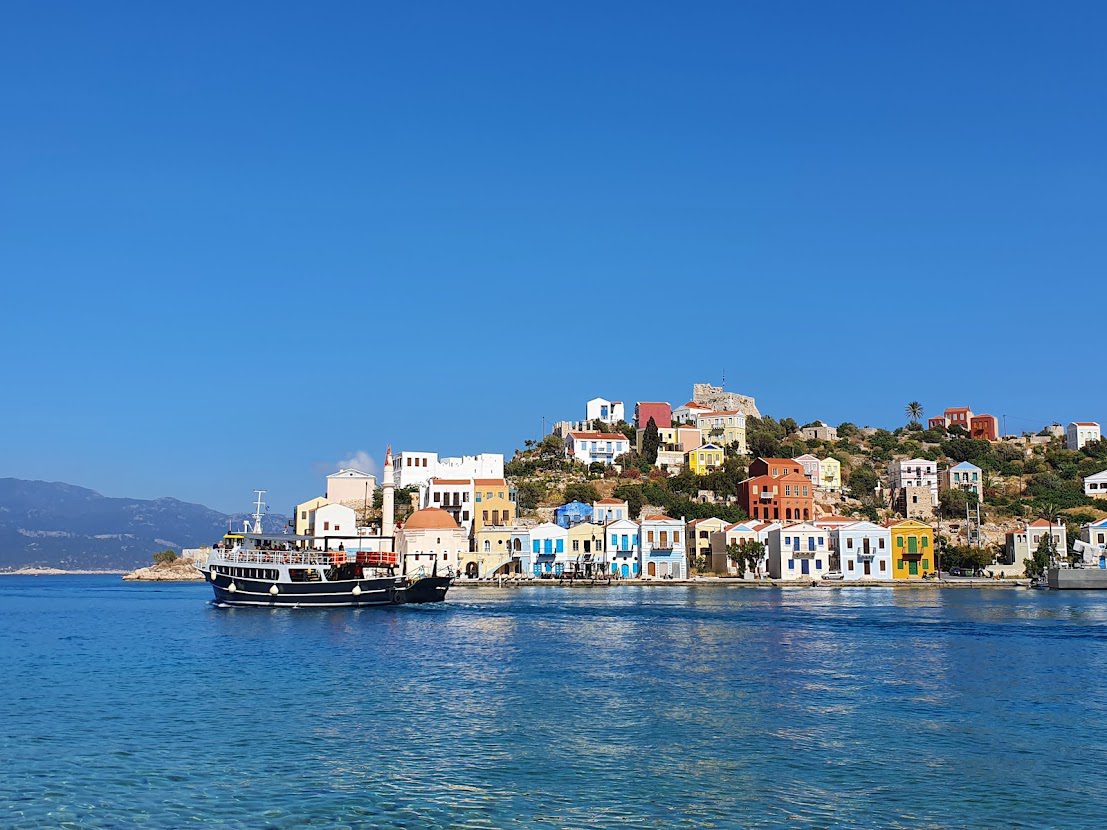 It is one of the most remote Greek islands you can travel to, and unique due to its geography and place in history. A couple of days is all that is really needed to see the main town and other highlights.

During our stay at Kastellorizo, we spent time walking around the town, went to the top of the castle, visited Paleokastro, and of course took the amazing boat tour to the Blue Cave! Perhaps the most rewarding though, was walking the 400 steps up from the town to a glorious sunset spot! 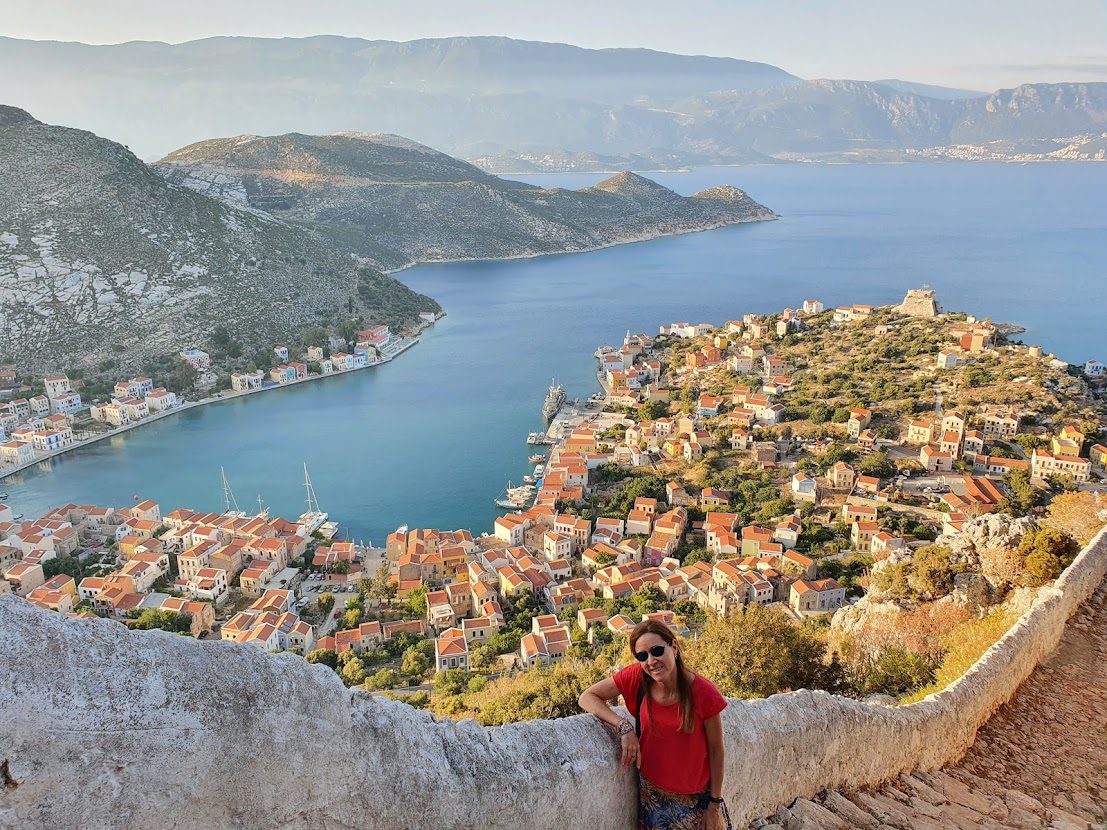 Read: How to get from Symi to Kastellorizo

Readers who want to find out more about the Dodecanese islands so they can plan an island hopping trip often ask questions similar to:

Which are the Dodecanese islands?

The Dodecanese islands are a complex of Greek islands located in the southeastern Aegean Sea. The most popular islands are Rhodes, Kos, and Patmos.

Where are the Dodecanese islands located?

The Dodecanese islands are located in the southeastern Aegean Sea, near the Turkish coast.

What is the largest Greek Dodecanese islands?

The largest of the Greek Dodecanese islands is Rhodes.

Is Crete in the Dodecanese?

No, Crete is not in the Dodecanese. 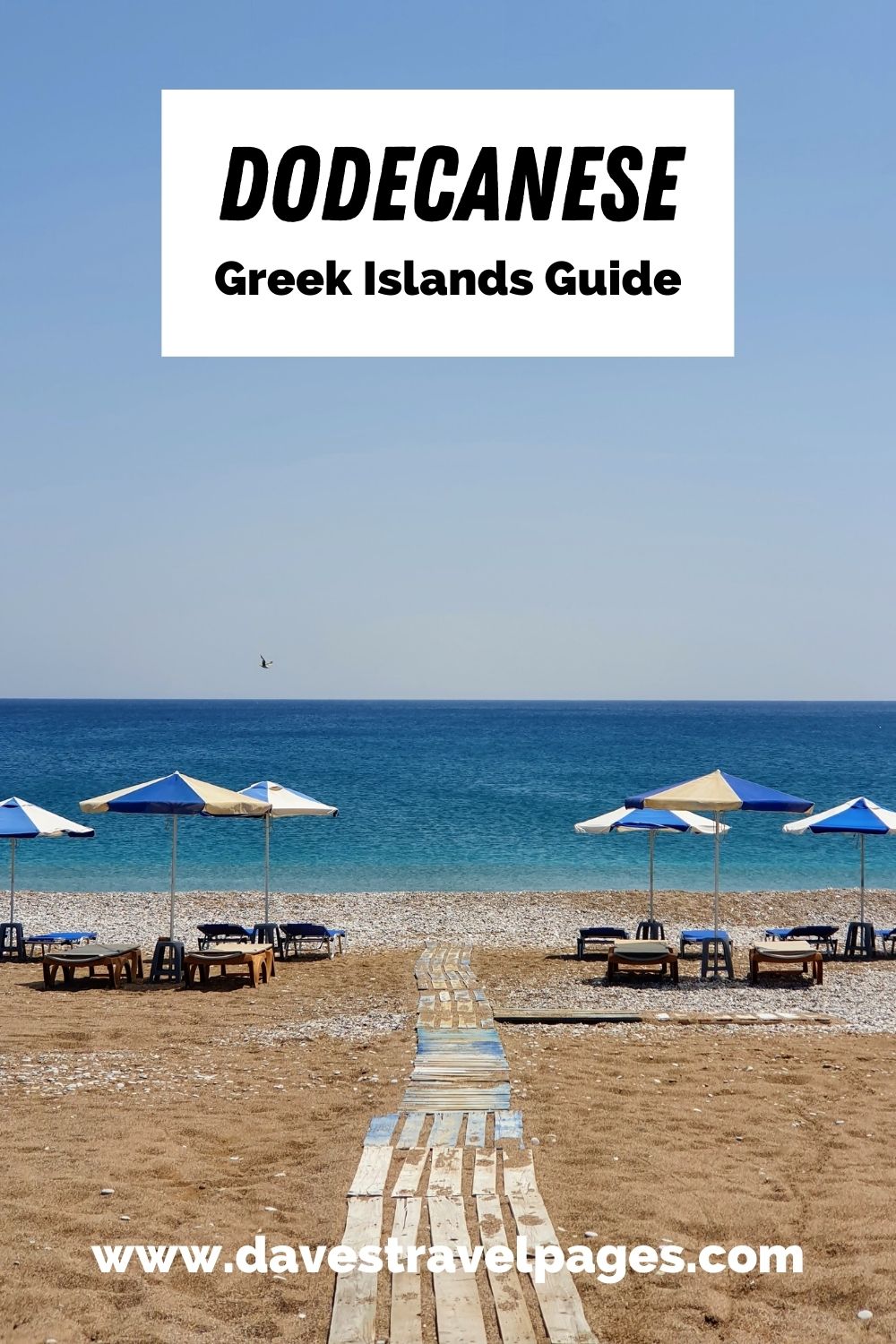 Dave is a travel writer from the UK but living in Athens Greece since 2015. As well as creating the Greek islands in the Dodecanese, he’s created hundreds of more guides about amazing destinations in Greece. Follow Dave on social media for travel inspiration from Greece and beyond: